The Valkyries (val-ky-rie) are stoic guardians of justice and protectors of the weak. Forged from great sorrow and cruelty they seek to right wrongs, enact revenge and enforce necessary justice [1]. As a rule the Valkyrie are a serious people, socially resistant to revelry, but more vulnerable to anger, sorrow and empathy because of the past tragedies that made them [2].

They wrote and maintain the Valkyric Code, the basis of law amongst Vikings. They serve as protectors of the Realm for Sigurd who took their exemplar, Brynhildr, as his wife and queen.

The history of the Valkyries is a horrible one. They are the survivors of the worst of what one intelligent creature could do to another. This has made them resolute and firm people against such tyranny, but the emotional scars of their past trauma will last for generations. The origin story of the birth of the Valkyries is called the Fornaldarsaga, this is a dark tale told as a part of a coming of age ceremony after their oath has been taken[1].

The origin of the Valkyries can be traced back to small island with a small village of hardy people that survived on the fish they could catch that day. During the chaos that followed the piercing of the veil the people somehow survived and prevailed even after the storms destroyed their boats. Brynhildr, one of the village’s most enduring young females, wandered the island in an attempt to help in any way she could. She was more interested in the training for battle that the boys received, she excelled at it and adapted her fighting style when the boys became bigger and stronger than her.

One day the village was visited by ships. Thought to be rescued from their isolation, the villagers rejoiced. Fear arose when realization of the nature of the ship was revealed it was a warship and it carried warriors. Instead of salvation, the warriors besieged the village. The lucky ones were slain early. The rest subjected to every vile act imaginable done, simply to cause suffering and pain. The elders were used as pack animals and many died from exertion, the younger ones were picked for marriage.

This all changed during one of the storms called a Malevolence. Brynhildr was finally brought to tears when the leader of the invaders used her mother’s most prized possession for one of their sick competitions. She refused to fight in the pits as part of their sick games. In a rage she attacked the warriors holding them captive but she was quickly slain. While she lay, dying, she cursed them with the name of Odin. The village wept for her passing, the storm changed - it’s energies gathered into the body, resurrecting Brynhildr into a new form. Where she had rags she now wore armor, she now held a spear and now had a pair of black wings protruding from her back.

She freed the villagers, and any whom joined her in the violent expulsion of the invaders were also transformed. They brought fierce retribution to their tormentors, serving death upon on them in means befitting their crimes. Henceforth, becoming agents of justice and guardians against tyranny. They would later go on to write the Valkyric Code to embody their beliefs. 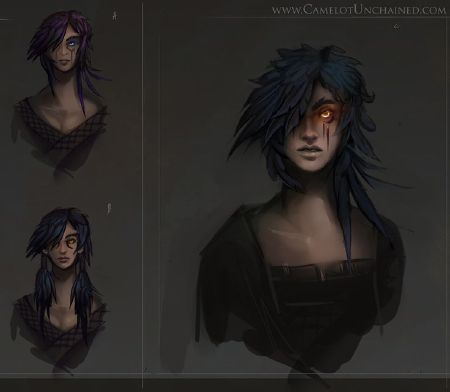 Valkyries appear similar to of their Viking human cousins, save for the head region. The tops of their heads form a plumage consisting of feathers of different lengths, textures and colors. Their feathers usually come in two layers consisting of short feathers along the top of head, with longer crow-like feathers branching out into styles as fashionable to that of normal human hair. Another layer of small feathers expands out to the their forehead, around the eyes to check bones and goes to a point at the bridge of their nose in a way to symbolize their bird-like visage. These feathers also span around the back of the head down the neck, and fan out to the collar region. Their pupils are slightly more dilated than normal human eyes, in bright colors ranging from light grey to yellow.

During times of stress, Valkyries bring forth their hidden magical wings. These wings emit a variety of dancing colors to appear as a flame that does not burn. For some Valkyries, this dancing light will emit a blue color, while others will be red or white.