Stealth is made of several mechanics that the allow players to hide or sneak up on opposing players. These mechanics were funded by the Stealth Unchained Stretch Goal. The primary trios that utilize these mechanics are the . All classes can make use of some of these mechanics, but the Archers, Scouts and Stealthers specialize in using them. Though stealth and trios that heavily utilize it might or might not be usable immediately at launch, depending on circumstances, anyway they will be in the game as soon as possible.

Some of the main goals for the design of the stealth system were to ensure that it was fun, not overpowered, wouldn’t promote or encourage Stealther gank groups, did not have stunlocking, no easy on/easy off stealth, and no unlimited stealth + strong opener + vanish. Another very important was that stealth and stealth classes work well within the entirety of the RvR framework, and not simply be something that be narrowly designed for solo or small group encounters only.

The design goals for this Stretch Goal can be summarized below:

Camouflage is useable by all classes.

Archer classes get “magically enhanced” camouflage. Camouflage effectiveness is determined by the garb and environment. Camouflage works by drastically increasing your concealment stat while in use.

Concealment prevents you from being detected and is different the Stealth. Whether or not you will be seen is based off an unknown formula that pits the users concealment value against the enemies detection rating.

Scouts enjoy a large boost to their concealment stat while in their scouting form with no duration to limit the effect, although the effectiveness may be diminished based on time of day. 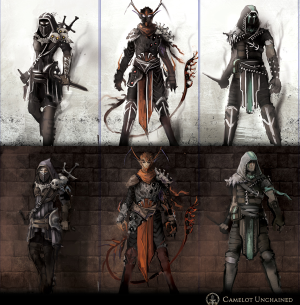 Stealthers before and after entering the Veil

Veilwalking is distinct from camouflage and concealment. Veilwalking is the Camelot Unchained term that best translates to traditional MMO "stealth", and is the primary mechanism for the Stealther trio. It involves the practitioner going into the Veil, and it is their presence in the Veil which provides these classes their stealth status. All in attempt to gain surprise, and/or build up resources in order to gain an advantage versus an opponent.

The longer the stealth classes remain within the Veil, the more damage they take when they emerge from the Veil. Estimates of damage are unknown. This is considered to be a balancing factor that allows CSE to give stealthers “strong openers”, and not force the stealthers to stand still to recover as was originally planned while unstealthing. This mechanic may or may not prove necessary and may not be kept (needs citation).

The more Stealthers within an area, the more Veil disturbance is created. Veil disturbance increases the damage taken while within the veil, and makes those inside easier to detect by creating more “noise” vs. the Detection statfromn their opponents. This noise is partially countered when many players help create background noise. This background noise will act as a mask to reduce the ease at which Stealthers are detected around larger fights. The results should be: