The Silverhands are a race of the Tuatha Dé Danann realm, the followers of Nuada's path. They are magnetically attracted to The Depths, since their king and hero, the first Silverhand Nuada, sacrificed his life there, pulling the Merchant with himself to into the abyss.

The Silverhands are famous for their Trials, which originate from the Trials of Nuada, the Tuatha forefather's tale of woe in which he braved The Depths and eventually had a silver arm fitted in place of his original. The Silverhands come from a tradition of self-sacrifice and pride in themselves and their heritage.

The tale of the first Silverhands is a long and dramatic story. The main character, Nuada, begins as a proud and haughty king of the Tuatha Dé Danann. He was so overconfident that when an old ally, Bres, betrayed his people and came to attack them, Nuada challenged Bres to single combat. He noticed an idol being carried by Bres' followers, an idol called Balor, but thought little of it. After a lengthy battle in which he displayed maniacal powers, Bres hacked off Nuada's arm with a magic sword of disquieting power. Nuada survived, but gave up his kingship and fled to seek power from the place his enemy Bres had got his: The Depths. 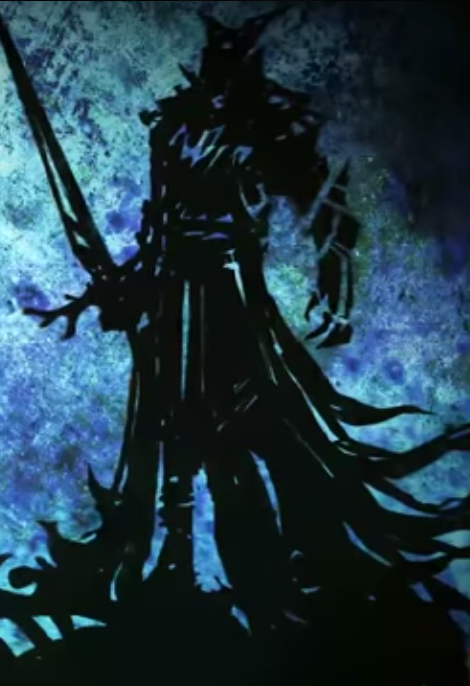 Nuada eventually met a merchant, (who later turned out to be The Merchant), who set Nuada up with some mercenaries and sent him to a hidden entrance to The Depths. Once he solved the puzzle to bypass the magic entrance, Nuada and the mercenaries (some of which he befriended; namely, a Dvergr named John Bigboote and a human called Nimue) entered cautiously. Within, they found a series of frightening and deadly challenges and rooms, leading eventually to a mysterious forge. Though some had died on the journey, Nuada immediately set about searching for treasures and power.

Upon returning to the forge, Nuada found several treasures laid out for him, apparently gifts from the merchant earlier. Among them was a magic golden arm to replace Nuada's severed limb. Nuada accepted all the gifts unquestioningly, and decided to leave The Depths to return and win back his kingdom. More horrific adventures ensued, until both of Nuada's friends had given their lives that he might go on. Nuada seemed to accept this as no more than his due, still consumed with pride. He finally escaped and set about gathering an army to help him retake Tir na nÓg, the capital city of his Realm.

With this army at his back, he finally returned. Nuada's army set up a siege of the city, which lasted a very long time without making progress. Nuada's anger and pride grew, and he caused more and more harm until the one who had saved his life previously, one Hamadryas, opened his eyes to the truth. His arm was not gold, the city was not still standing, and he was not a triumphant king but a horrifying servant of The Depths and The Merchant. Once she lifted an illusion spell, Nuada saw that his arm was a giant hairy spider's arm, and the city lay in ruins. He found the place greatly changed. The living idol, Balor, had been set up in the city's square, and a beam of light from its eye would cut in half any who approached.

Nuada befriended another Dvergr, Miach, who told him he could create a silver arm instead, once they returned to The Depths.

Nuada eventually removed his arm, tore down the statue, and returned to The Depths to see if he could find humility and find any traces of the friends who had believed in him. Within, after getting his silver arm attached, and yet more adventures, he found both Nimue and John hooked up to machines in The Depths in horrifying ways. He rescued them, but all were forced to fight an army of disgusting monsters as Nuada searched for more clues as to what was going on. He eventually found Bres on a throne, holding many treasures, but frozen in time and helpless, unaware of his surroundings. He had been tricked into serving The Depths as well.

Finally, Nuada and his companions (which included Lugh, a Tuathan master with a spear) found The Merchant. After another terrible battle, Nuada was forced to throw himself into a chasm with a huge mouth at the bottom to drag The Merchant down with him. The companions journeyed to the surface, and met Hamadryas at the entrance, ready to heal them.

The lore revealed so far suggests that Silverhands will have one artificial hand, likely crafted and shaped in various ways to be used as a powerful weapon.

(This whole subsection is quoted from Kickstarter Update #91) 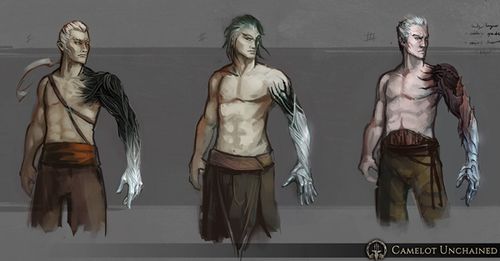 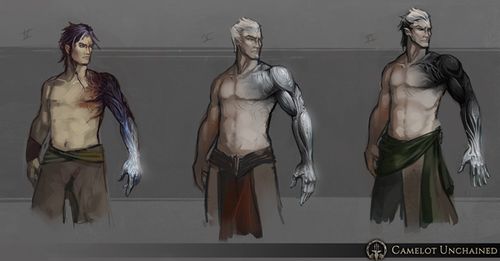 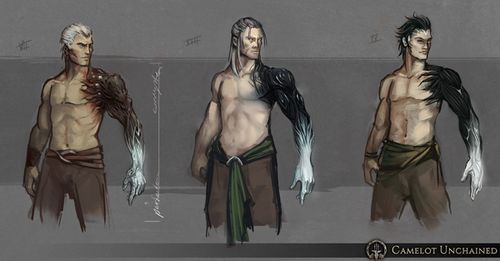