Scout is one of the stealth classes of Camelot Unchained, based rather on scouting, infiltration and sabotage than on engaging direct fights and killing other players.[1]

This class might or might not be playable immediately at launch, depending on circumstances, anyway it will be introduced as soon as possible.

Scout`s playstyle will be very different from that of `Walkers and `Stalkers, as Mark Jacobs explained recently:[2] "Right now the intention is to keep the class focused on scouting and infiltration/sabotage. They are not intended to be good in traditional 1:1 battles as that would start them down a dangerous path. This way, we can focus their abilities on a limited set of things, make them quite powerful and not worry about them crossing the line into assassins.  Scouts are really going to be designed for people who want to scout and be a PITA (pain in the...) at times but for whom PKing (player killing) is not something that they are interested in doing."

In the same thread he mentioned:[2] "The VW/VS will absolutely use the Veil for movement. Scouts might as well but I'd prefer to have camouflage, spirit travel and the Veil as three separate mechanics for each archetype." So, even the concept itself is still a work in progress. 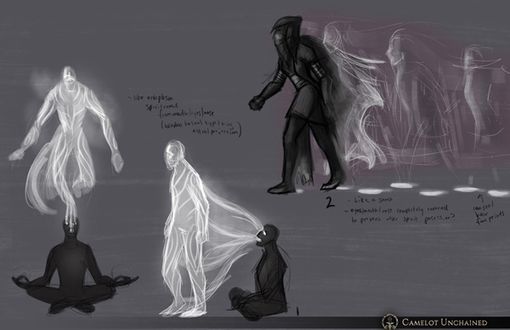 As mentioned, Scouts will be able to Spirit Travel by separating their soul from body, with the body-soul maximum range increasing with skill. They will also be able to use special lanterns as a "home" instead of body, but someone else (for example, their party) will have to carry these around.

Scouts will have the choice to specialize more either into spiritual or corporeal side of their duality, with various gains - for example, a Scout with strong party support would likely want to maximise his spiritual/traveling strength, relying on others for carrying around and "corporeal" defenses.

Scouts will also have the ability to (in spirit form, of course) travel through walls and other obstacles, together with some telekinetic powers enabling them to infiltrate enemy bases, sabotage siege engines and do all other kinds of nasty stuff to enemy players. "The ultimate troll class", as one guy on forums described them. Enemy will, thou, have some tools to try to detect and kill scout even in spirit form.