RvR (stands for Realm versus Realm, denoting three Realms at war with each other) in Camelot Unchained is the main drive of all gameplay [1], including skill progression. Players will be able to fight for resources and conquer territory through sieges, building and destruction anywhere in the huge world except for the relatively small starting areas of each faction. Looting & pillaging enemy structures will be possible [2],[3], but there will be no player loot upon death.[4]

Guild and Realm pride will be encouraged and death will be meaningful. Due to item decay and building destruction, fighting for resources will be crucial for the economy and successful war effort: builders, crafters and miners will even have their own, 100% dedicated class.

Very important aspect of the war between Realms is the travelling and shapeshifting PvE/PvP dungeon, the mysterious Depths. The Realm that has access to it`s gates will be strongly tempted to leave the territories they conquered "outside", thou The Depths itself will also be a battlefield.

The Great Betrayal and the Second Breaking of the world mark the beginning of the long war between the three Realms, founded by three Sword Brothers - Arthur, Sigurd and Nuada. Each Realm sees its own way as the only way to unite, rebuild and protect what the cataclysmic Second Breaking left unshattered and alive, thus fighting to dominate and shape the world.

The noble Arthurians are preferring civilized ways, diplomacy and aliances while the fierce Vikings think aliances are fragile and words are cheap, thus aiming to conquer the world by fire and sword. Mysterious and exotic Tuatha Dé Danann believe in harmony and return to the Mother Nature as the only way to survive the hard times. 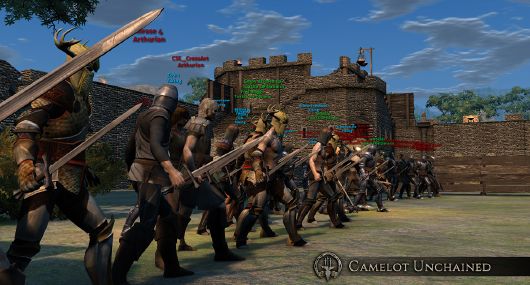 Economy and infrastructure will be crucial for the war effort: crafters, builders, and miners will have their own, 100% dedicated class

Some Realms on some servers will inevitably have inferior player numbers, and this is how Camelot Unchained plans to help the underdogs:

Zerging is natural part of RvR games, and the general idea is not to eliminate it but rather to give enough worthy playstyle alternatives.[9],[10] There is many aspects of Camelot Unchained that will help achieving that aim. 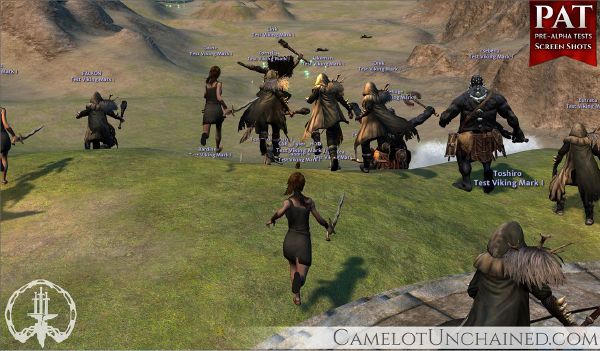 Question: It was previously mentioned that solo play should and will be a viable option in CU. How are you going to make it happen?

Renée Machyousky: Mark is a fan of solo play. So, while we can’t describe actual mechanics/details at present, I feel confident saying solo play will be a viable option for those who prefer that playstyle.[11]

Mark Jacobs: Is small group combat going to be useful in CU? Absolutely! And I also want this game to support solo play.[12]

Andrew Meggs (from the Foundational Principle #13, "Chaos Goes Boing!"): As soon as you make physics part of your gameplay, you open up the possibility for things to happen beyond just the simplistic model of pen-and-paper combat. That castle wall didn’t just “become destroyed”. The chunk you took out landed someplace, and maybe on someone.

Mark Jacobs: Another thing to keep in mind is that this is going to be a big world. The smart Realms will go out and build forts, towers, keeps, etc. And the purpose of those will be to help keep the settlers and their homes safe. Again, think big spaces, very limited insta-travel, etc.[13]

Mark Jacobs: Again, I can't emphasize enough that this is a big world. Please don't stress on the thought that your houses will be burned down every night. It isn't going to work that way unless your Realm isn't working together at all.[14]

Renée Machyousky: Quite possibly so. We love the idea of Realm and guild pride as well as unique character customization. So there is a chance you will see guild emblems on more than just cloaks.[15]

Renée Machyousky: Yes, there will be guild standards/tabards that players can proudly carry into battle. Just keep in mind that it may end up in the halls of your enemy if you aren’t too careful! [11]

Mark Jacobs: Losing a keep will hurt, it has to, especially to discourage keep trading. You will not want to lose a stabilizer/artifact, especially if you are on the numerically superior team. [16]

Question: If a player built house is destroyed/ransacked by the enemy realm, do you envision all contents being destroyed? Or will it be more of a money sink to have to rebuild the house, but items contained within are somehow saved?

By conquering territory, the Realms will be changing the very shape of the World: the map immediatelly after the Second Breaking is on the left

Renée Machyousky: We don’t want folks to feel like they hit a quit point each time they lose a house to their ravenous and ever-present enemies. Blueprints will help with this, yet if someone lost all of their valuables each time their house was raised, that could produce a defeatist attitude. A system where part of a players vault is safe in the Capital city (you must journey there to access it) and part of their storage is in their home and is vulnerable, could work. Even when storing items, choices matter! [3]

Question: Will there be any looting and/or salvaging of destroyed structures?

Renée Machyousky: During our Kickstarter Mark talked about how players will have a choice in how they approach the destruction of structures. If you go down the ‘burn, baby, burn’ route, there isn’t likely to be very much left for salvage. However, if you choose to try and salvage the house right from the start, picking it apart piece by piece, you will be able to get some materials from it. It’s rather likely that taking the place down stone by stone will take longer, so watch for arrows in the back! [3]