As a result of the successfully funded stretch goal "Spirit in the Sky", Camelot Unchained`s magic will be extended by one pet class per Realm. These classes will be capturing, summoning and manipulating Spirit Pets,[1] a kind of crossover between "classical" pets and summons/spells.

The Spirit Pets will be much more than just "fire and forget" spells with "attached" heads - their master will have full time job summoning, directing and controlling them, which might include capturing lost souls from The Depths as servants.

Commanding pets will sometimes be done through the system of portals (see images below) and pets will work in many different ways: similar to classical "flesh and bone" pets, or like DoTs, turrets, scouts/hidden cameras etc. 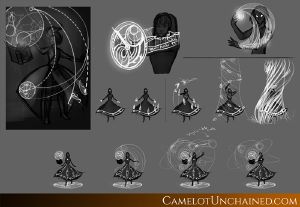 The aforementioned stretch goal was (the first one) from the "Extender Pack Plus" series and as Mark Jacobs, the CEO of the City State Entertainment, explains: "An Extender Pack Plus is content that might be released prior to launch, ONLY IF we can do so without adding to the release date but if not, it will be released post-launch." [2]

"...So how will these pets work when it comes to actual gameplay? Why would you want to play one of these new pet-based mage classes over the existing spellcasters?

First off, if you choose a pet class, the focus truly is on using and controlling your pets. Whether it’s summoning ancestral revenants to fight at your side, raising demonic shadow beasts from out of the darkness, calling forth powerful animal spirits from within the Veil, or perhaps something else entirely, pets are not a secondary feature to an already powerful mage; they are the main mechanic you’re going to need to leverage in order to defeat your enemies." 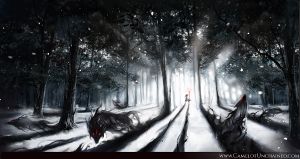 "...In terms of use, pets aren’t present as independent corporeal entities walking around on their own, so instantiating them, manipulating their form as they traverse distances, and directing them to carry out desired actions on specific targets, is a very involved proposition.

This requires more planning and preparation than simply conjuring a blast of magical energy. The benefit, however, is that pets offer constant pressure, leveraging a diverse range of capabilities unique from those of other mage classes."

"...In terms of game balance, this is the first time we have talked about a second class of the same archetype within a Realm (referring to mages, in this case).

As Camelot Unchained grows and the number of classes increases, there will be a broader range of choices within the archetypes, and even potentially new and different archetypes, with mechanics that set them apart from the existing ones we have already defined. The important thing to keep in mind is that as this process takes place, new and existing classes for each archetype don’t have to be compared along an apples to apples scale, because in an RvR environment there is no perfect situation where everyone performs equally at peak efficiency.