The One True City

From Camelot Unchained Wiki
(Redirected from One True City)
Jump to: navigation, search

The One True City is Camelot, the central city founded by the three Sword Brothers that pulled the broken world together and initiated a brief golden age.

Initially imagined by Arthur, the building of the One True City pulled the three Realms together in peace and harmony, just as it pulled the land together. After many years of success, infighting began to tear the place apart, until in a great betrayal, the Second Breaking of the world occurred, and Camelot was torn apart, along with the lands it had pulled together. 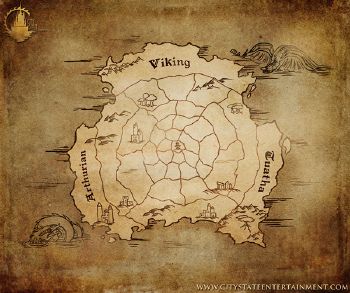 The World map before The Second Breaking: The Camelot was in the middle, holding the lands together

Through the war, the Realms will be changing the very shape of the World: the map after the Second Breaking is on the left

Main Article: Tales of the One True City

Arthur had the initial idea for the One True City, and traveled the world to convince others, especially the other Sword Brothers, to help and build it.

A significant part of the One True City's nature is that it was supposed to belong to all of the Realms, but many could not understand that, which is part of what led to the city's downfall.