Small and often underestimated, the Luchorpán are natural-born tricksters, masters of misdirection and illusion. They believe that lies can reveal the truth, that a person’s hidden nature is revealed when they are the victim of a prank.

The clever fingers of the Luchorpán are naturally skilled at powerful crafting, and their quick reflexes, excellent hiding skills, or talent for climbing often get them out of whatever trouble their mischief gets them into. If all else fails, rumor holds that Luchorpán can simply vanish and reappear elsewhere. Bonds of love are considered unbreakable among the Luchorpán, and any of them would give up life itself to defend their family or their Realm.

The past of the Luchorpán is one of loss, like any of those who survived the First Breaking, but it's also one of redemption. A proud history of making the most of life, not giving into despair, and promises kept.

The first of the Luchorpán are detailed throughout the many tales of The Adventures of Gadai and Aingeal, so the origin of their people is how the eponymous duo met.

Gadai started out as a young orphaned thief along with his sister Angha. He had a personal code, where he only stole from those whom could afford the loss, never took more then he needed, and always shared with those in equal need as him. To add to his reputation he often played very amusing pranks to his victims, who were often amused by them as well.

That all changed when the Veilstorms started to pelt the village he lived in. As he grew older and became more respected he and his sister lived on a house on top of a hill. Veilstorms that did came to the village caused the town suffered greatly. Though, with each passing storm Gadai's house was spared by their wrath.

In their jealousy and suspicion the village turned on Gadai, when his home was left untouched by storms. In their frenzy they blamed their misfortunes on the thief, fueled by past victims of their thefts, and formed a mob. The mob chased Gadai and his sister from their home, and exiled from the village; bringing fury to Gadai's heart.

The storms didn't let up, and soon came a massive Malevolence. It struck the town first, ravaging it and their old home terribly before making it's way to the cave where they had relocated to. The cave was no defense against the black energies and Angha was turned into an Abomination in Gadai's arms despite his best efforts to shield her from the storm. She was forced to mercifully kill her bring brought him into even further despair.

Over the years, Gadai enacted a terrible revenge. He abandoned his code, and stole everything he could. His pranks no longer playful, but meant to cause pain. His every theft caused him to shrink in age, and his face twisted to reflect his new evil.

Gadai happened upon a house of a merchant and his family when yet another Veilstorm hit. While he was rifling through the merchant's treasures, the house was racked with magical energies. The family of the house were transformed into Abominations, save for a young woman. Without thinking, Gadai went to the woman's rescue taking horrible wounds, think of Angha. He thought back to the cave where Angha had died, and blacked out.

He awoke days layer to in the same cave, formally meeting the woman whom would forever change his life. The woman's name was Aingeal, and she in appreciation said she would marry Gadai someday. He took her back to village, and watched from afar. Slowly, he remembered his code, and became the man he used to be. Aingeal eventually found Gadai, and affirmed her desire to marry him; finally mending his heart. Together they would cement the example for those like them to live by. 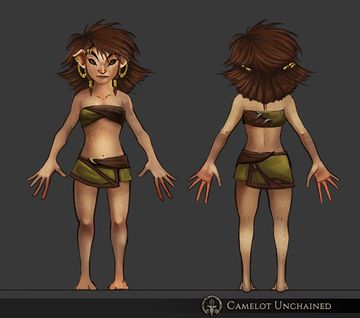 Luchorpán are spindly-limbed humanoids, standing about half the height of that a normal human. They have somewhat angled faces with long ears, and prominent sideburns that either around their chins or hang down. Have full heads of wild coarse hair in hues of brown to red in color. They have thick high arched eyebrows, with males having much more distinctive growths that often blend into their sideburns. Eye colors are bright, usually yellow or light green.

The most unearthly feature is their hands, with elongated index and middle fingers capable of fine precision. Their feet have large gaps between the large toe and the rest, with a strong joint which allows more locomotion to allow for easier climbing, similar to more ape-like primates. They almost all adorn themselves with a varying amount of piercings along the lower parts of their ears, perhaps as a means of rank or accomplishment. Additional piercings on the upper ears, lips, eyebrows, and the bridge of the nose are not uncommon.