The dynamic map of Camelot Unchained consists of the shattered remains of the Old World, Islands that change positions and appearances based on endless battles between the three Realms: the changes are based on territory control and the construction of powerful stabilizers.

Because of the worlds shape and size, death and travel will be meaningful, hopefully discouraging zergs. Players will be travelling by foot (with speed class confirmed), by caravans, boats [1], by swimming [2] and player built bridges (across the abysses in The Depths [3] and maybe between islands once two of them are drawn closely enough together). Also, mounts are not confirmed yet.[4]

The map is divided into many islands of varying sizes, where players engage in RvR combat, build and destroy structures, mine, craft, gather materials, harvest and so on. While some islands are static (i.e. homelands of the three realms - the safe zones), most land masses in Camelot Unchained are dynamic.

Impact on the Game[edit | edit source] 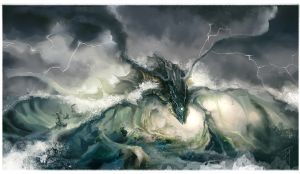 Travel between islands is currently believed to be primarily by boats and eventual player built bridges, once two islands are drawn closely enough together. There are no plans, at least not before launch, to have naval combat.

The current plan is that all islands except the three starting ones are open to RvR combat. The shape and the size of the world, together with no auction houses planned, should move the economy towards local markets, with it`s shops and bazaars.[1]

An island must be controlled by a Realm before it can build a stabilizer there, and only one Realm can build a stabilizer on a given island at one time. How a Realm gains sufficient control has not yet been revealed. It can be presumed that stabilizers will only be able to be built by the crafting class of each Realm, and that they will be expensive in terms of resources to build, but this too has not yet been revealed. A stabilizer can be shut down, and must be for an opposing Realm to displace another that has previously placed a stabilizer on an island.

A stabilizer gradually changes the landscape to match that of the owning Realm [5] and slowly moves the island toward the home island of that Realm. Stabilizers can be fed power (the source of this power is yet to be revealed) to speed up the process, though at this time it is unknown if there are different mechanisms to speed up one process and not the other, or if only one can be affected at all.

Besides "travelling" islands with varying textures [5], the environment might also change in some unpredictable ways, as Mark Jacobs explained: "We will look at adding a lot of randomness to the environment in terms of how not only it evolves over time naturally but also how the effects of magic that the players inject into the environment can also affect it over time as well. The landscape should change not just because of seasons (which would, IMO, be a good addition to this game)." [6], adding that "It could also mean that the geography of an area could suddenly change or even that certain beings might manifest themselves within the world quite unexpectedly and with rather interesting results." [6]

Travel between separated islands is currently believed to be primarily by boat (there are no plans to have boats which can be controlled by players at launch). Once islands have been drawn closely enough together, it has been hinted that bridges may be built between them to facilitate land travel. Other means of transport have not been ruled out, nor revealed, except that instant travel will be very limited.

The number and variety of sizes and shapes of the islands have not been revealed, aside from the general statement that the home islands will be along the outside edges. The islands closest to the center are expected to hold the rarest and most powerful materials for crafting and building, as well as the remains of the One True City.

From lore, it is believed that the entrance to The Depths will move from island to island, but this has not been confirmed aside from the fact that only one Realm will have access to it`s entrance at any one time. More information on The Depths can be found in this video. 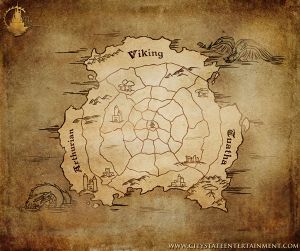 The map of the Old World, just before the Second Breaking

The world of Camelot Unchained when the game begins is a group of many islands surrounded by areas, known as the Stormlands, that cannot be explored due to overwhelming Veilstorm activity. It was not always thus, before the Piercing of the Veil, all the land and all the seas of the world could be traveled upon. Even after the initial apocalypse, known as the First Breaking of the World, the known land was still not divided as it is now.

When the Emissaries first taught the three Sword Brothers how to use stabilizers to hold back the Veilstorms, all the land known today was forged into one piece. Later on, the One True City was founded at the center, and there the strength of the stabilizers was greatest. As time passed, the Veil grew more and more angry that it was unable to affect the land around the One True City.

Sadly, time changes all things, and the relationship between the Three Sword Brothers was no exception. A divide came between them, and they went their separate ways. Once the last stabilizer was removed from The One True City, the Veil was free to express its displeasure. Just as the Sword Brothers had become divided, so too did the land - this event is now called the Second Breaking of the World.

The Brothers initially set out in different directions, first to their homelands, then pushing as far as they dared into the Stormlands. But they each soon found that the world had been lost to the Veil, and it was not possible to continue outward.

Each returned to their homeland, near the edge of the influence of the early stabilizers. There they re-established settlements with new stabilizers. Each settlement reflected that particular Brother’s vision of how the world should be. These settlements would grow to become the capitals of the three Realms and each is on its own island of the known world.

As part of the Second Breaking, the Veil wreaked havoc on the land where it had been denied for so long. The closer to the center, the greater the land felt its fury. The Veil literally tore the land to pieces. Because of this, the islands that exist today are generally larger the farther away the land that comprises that island would have been from the One True City. Each island fits together with the others, the way a jigsaw puzzle is completed. And this may be done, or so it is believed, if one Realm could bring them all together under its banner alone.

Through the war, the Realms are virtually changing the World shape: the map immediately after the Second Breaking is on the left

This might now be the ultimate goal of each of the Brothers; to rejoin all the known lands into one solid piece under his own rule. The key lies in the use of one of the Emissaries' gifts, stabilizers. Stabilizers not only hold back the worst of the Veil, but through the construction of stabilizers on an island, each Realm is able to shape that individual island to its world view.

But that’s not all! The stabilizers not only reshape the land, they also draw the island closer to the capital of the Realm that owns the stabilizers, eventually connecting that island to the adjacent piece. It is for this purpose that each Realm fights the others, to win the right to build their stabilizers on an island, and to one day make all the world fit their own vision. 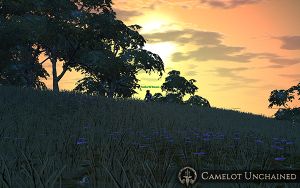 As Beta tests get closer, the world is slowly getting "populated" with celestial bodies, clouds, vegetation...

The world of Camelot Unchained "will be big" [7] which is also implied in the text below. The world size is naturally conneced with mounts (which are still unconfirmed), travelling, speed class, zergs and death/resurrection.

As game designer Ben Pielstick explained in the "Dose of Design" section of the Unveiled Newsletter #2, the exact map size and shape are yet to be determined but the general guidelines are:

An Early Look at the World[edit | edit source]

As Beta testing is getting closer, the world looks more and more real. Lots of things are being added or improved - from little ones such as barrels, crates, trees and flowers to early iterations of water, rain, clouds, celestial bodies and so on.

Camlann is the capital of the Arthurians

Midgard is the capital of the Vikings

Map Reveal - Here is a video: