Those who swear fealty to Hel, the Mother of the Nine Worlds, become infused with the dual forces of life and death. The bodies of the HelBound bear the marks of their service, etched with the forces of Hel’s magic, which dwells within them. Often at the forefront of battle, a HelBound may find controlling their power a great challenge, for they can both heal and destroy. They can cure the mortal wounds of allies and wield fear as a weapon, frightening enemies to death. As for their own death, those who take Hel as their patron tend to recover quickly. Unless Hel has chosen something special for her fallen devotee.[1]

"Those who swear fealty to Hel, the Mother of the Nine Worlds, become infused with the dual forces of life and death. The bodies of the HelBound bear the marks of their service, etched with the forces of Hel’s magic, which dwells within them." [2]

Beneath a dormant volcano, a group of initiates dressed in black and red robes are put through a test of endurance. They are subjected to intense heat, bitter cold, and noxious fumes. Many initiates succumbed to these conditions and had to be carried out. Eventually, the room balanced and filled with the smell of death as the robed Speaker of Hel emerged.

He began to tell the remaining initiates of the Greater Power that was Hel and her transformation by the Veilstorms. He spoke of her dual powers of life and death, and her transcendance of mortality.

The Speaker warns that once the vow is taken, the initiates will be marked by Hel so that all will know them as being bound to her. He speaks of the choice of Paths before them, life and death and reveals that the HelBound's power is drawn from the Veil through the intervention of Hel.

The Speaker finishes by warning them of the price they must pay for serving Hel, revealing his deformed body: one side hung with dead flesh, while the other seemed all too alive and writhed with growths and strange organisms. 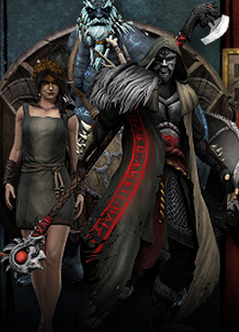 Equitable Exchange
Deals damage to nearby enemies based on missing health, and heals nearby group members based on remaining blood.

Hel Revealed
If the user has a Hel Mask equipped, removing the mask causes a large amount of panic to nearby enemies, and deals damage to them based on their resulting panic rating.