The Hamadryads are the guardians of the Great Protectors that help shield the lands of their Realm from the fury of the Veilstorms. They are part of the Tuatha Dé Danann because this Realm has respect for the great Oaks with which Hamadryads share a special bond.

The Hamadryads share their wisdom and verdant magic with the Realm in the conflict against its enemies, helping to conquer or to build the bulwarks that shield the races of the Tuatha Dé Danann from the dangers of the shattered world.

The history of the Hamadryads is one of symbiosis and rebirth. One of a people and a mighty tree that perished in the fury of a Malevolence, only to come back stronger than ever, their faith rewarded.

The dawning of the Hamadryads began at the heart of the forest. The elder Emon Alsea had taken his family far into the forest, settling next to a great oak for the refuge as the Veilstorms came to the lands. There, they lived in harmony with the land. Never taking more than they needed. A life of preserving nature, being a part of it.

Their lifestyle resonated with others, and they formed an enclave around the tree. The tree appeared to have shielded them in return. As the Veilstorms sundered the land around them they continued to live in tranquility.

That safety continued until the coming of a Malevolence. Their enclave was battered and they had to retreat to the great oak at the heart of their society. There the remaining Alsea family tried to shield the tree with their bodies. The nine stood defiant and chanted to give each other the strength to endure, the youngest granddaughter of Emon offered her life in place of the tree and, in the aftermath of the Malevolence, only the trunk of the once great tree remained.

To prove the mysterious nature of the Veilstorms, another Malevolence appeared in the same spot a year later. This time, a new type of tree emerged from the husk of the old oak with a dazzling display of shimmering magic. The power of the tree and the storm clashed in violent opposition, the struggle ending with the tree absorbing the power of the Malevolence and redirecting it. This massive tree became the first of the Great Protectors. A year after the contest, the grove was restored by the arrival of a large number of smaller trees that sprouted around the new great tree.

Decades passed, and the grove become a place of worship once again. One day, a visiting youth awoke the spirits of the people who protected the grove by touching the largest of the trees that ringed around the Great Protector. The spirit that answered his call was the reincarnation of Hamadryas, the youngest brave granddaughter of the Alsea family that disappeared so long ago, who emerged from the tree he touched. She then summoned the rest of her family and protectors from the remaining trees in the grove, though the spirit of Emon remained at rest in the great heart tree. These beings of nature and their heart trees would spread to the entire forest and become known to the Realms as the Hamadryads. 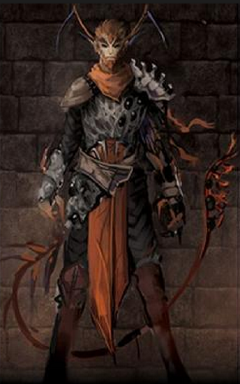 Hamadryads are humanoid hybrids that are an amalgamation of human, insect, and tree aspects. Their faces have human-like features with strangely alien eyes of various colors. Their heads are crowned with tufts of hair and pairs of insectoid antennae. The skins of their bodies display vibrantly colored patterns, with areas of carapace protecting their shoulder, chest, hand, and hip areas.
Their arms up to the wrists and legs below the knee show as a veined wooden texture. Their feet fan out in arches, similar to the shape of roots. Their most attention-grabbing feature is their long whip-like tail, that moves with a life of its own. Leaf patterns form at the base of the tail, while the end of the tail forms one of many different types of natural defenses, such as poisoned barbs, spikes, or pincers.