Guilds are of great importance for the community of Camelot Unchained, especially connected to the building of the guild and Realm pride [1],.[2] Big guilds of each Realm should play a major role in organizing sieges, on which holding or conquering territory will depend on.

It has been hinted that guilds will be able to display their heraldry not only on cloaks, tabards or standards but also on some other less common places, such as shields etc.[3],[4]

Renée Machyousky: Quite possibly so. We love the idea of Realm and guild pride as well as unique character customization. So there is a chance you will see guild emblems on more than just cloaks.[3]

Renée Machyousky: Yes, there will be guild standards/tabards that players can proudly carry into battle. Just keep in mind that it may end up in the halls of your enemy if you aren’t too careful! [4] 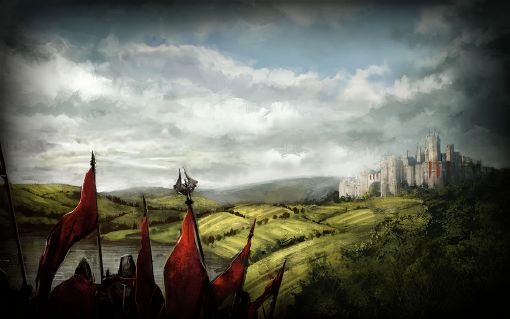 Question: Do you believe in placing limits on the number of members in guilds?

Renée Machyousky: The maximum size of guilds has not been determined yet. One of the things we’ve seen in other games is that too often, a couple of very powerful guilds come to dominate a server. While we do expect to have large guilds, we’re pretty sure that having ones that can grow to any size is not going to happen.[4]

"Guild pride is another important member of the Pride family, the decades long rise of guilds in importance to both players, and designers of MMOs cannot easily be overstated. While we need to walk a bit of a tightrope here (so what else is new?) as we do not want any server to be dominated by one or several “super-guilds,” we also want our players to feel pride in their guild’s overall accomplishments.

During the development of WAR, we did some very good things with the “Living Guild” concept;[5] We have to surpass that here because the purist nature and implementation of RvR conflict in CU presents an opportunity to take guilds to the next level. Thus, at a minimum, guilds should be able to own and build guild houses, land and possessions in a size and manner that reflects their success in the game whether due to participation in RvR and/or as crafters. Guild members must be able to contribute to that success both actively (through donations, crafting) and passively (guild standing reflects the skill/successes of its members) and to be proud to be a member of their guild.

Additionally, we need to put mechanisms in place so that guilds can easily work with each other, share information and cooperate in a way that adds to the enjoyment of RvR by its members and the overall success of its realm. If we can allow players to feel guild pride on the individual level as well as pride on a greater scale (cooperation), this will further enhance the feeling of the next and final pride, server pride."

The video below is The Opposition Podcast with Mark Jacobs; here (the first post in that thread) is the list of topics, in order in which they appear in the video - skip to 48:30 for guild politics and Realm pride: