Golems, the Klin-Born are an Arthurian giant race. They are mighty builders and can transform their bodies to give shelter and protection to their allies. Over time, Golems are growing bigger and tougher.

Giants of clay and fire, the Golems are known as the Kiln-Born. The Golems serve Arthur’s vision by sharing their knowledge of a deep word magic, for Arthur took them in when all others rejected them.

Many dark rumors circulate about the origins of the Golems, though all are foul lies. Indeed, it is said that any Golem leader who speaks a falsehood is destroyed, as their very existence is tied to truth. Stalwart and wise, the Golems seek greater knowledge, and a piece of the world for their own.

The story of the Kiln-born traces back to their imprisonment by the "Speakers of Lies," who used the Golems as slaves. The Golems were born in fire but raised in darkness through the magic of the Kiln of Ur. They lived in the caves below the great castles of the Speakers. Knowing no truth and feeling great shame for an imagined act against the Speakers of lies in the past.

The Golems slaves were set to work, building storehouses and fortresses for the Speakers in exchange for their forgiveness. The Speakers kept them in the caverns and tortured them in The Depths. Only at night were the Golems allowed outside, kept between rows of their shadowy masters to build their towers under the cold stars until the rise of the Golem mother, Maharal. The Becoming Story tells us how they finally realized who they are and rose up to search for their final home as Arthurians. 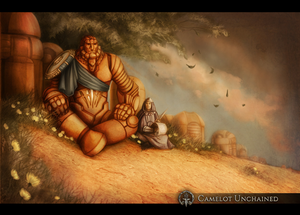 Yosef tells the Stories of Becoming to an Arthur`s scribe.

They appear like giant-sized humanoids, but reddish and constructed of many earthen layers. A great fire seems to burn within them as they stomp toward battle. Golems did not always have mouths or the ability to speak until their transformation in The Becoming Story. 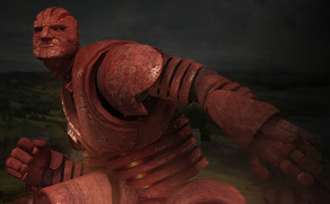